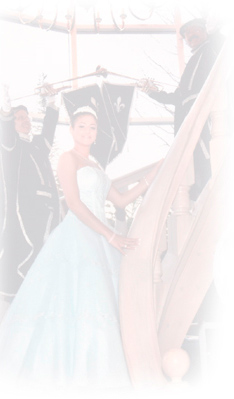 You're Sweet 16, you're beautiful and...you're the Princess of the Hour!

Be the star of the show as your trumpeteers make your entrance a magical moment.

It's party time...let the celebration begin!

The Quinceañera, or Quince años ("fifteen years" in English), in Latin American culture, is a coming of age ceremony held on a girl's fifteenth birthday, comparable to a Sweet Sixteen celebration. Like many other coming-of-age ceremonies, the Quinceaños is associated with "becoming a lady."

The Quinceañera ceremony and celebration came from French culture during the later part of the 1800s. Mexican president Diaz was so fond of it that he made it a part of Mexican culture as well.

The meaning of the ceremony has changed over the centuries, but the celebration is becoming even more popular in the United States. Quinceañeras celebrated in the United States today are quite often elaborate, and even extravagant affairs, much like a wedding, but with a strong religious influence. The entire day of church service and party is certainly a means of preserving identity, even as Latinos become more Americanized. Today the Quinceañera celebration remains a unique feature of Hispanic culture.

The celebration carries religious significance for Spanish-speaking Roman Catholics . It begins with a religious ceremony in which the Quinceañera affirms her faith. It is customary for the Quinceañera to receive gifts that are religious in nature, such as a cross or medal, a Bible, rosary, or scepter. The presentation of these gifts by her Padrinos (Godparents) and/or her family members, along with their blessing by the priest, often forms a part of the ceremony.

After the church service comes the party! – held either in the Quinceañera's home or in a banquet hall. The decor of this reception often resembles that of a wedding. The Quinceañera's court is typically composed of her padrinos (godparents), her best friends (Court of Honor, both boys and girls) and the Chambelan, a young man who is her companion and date for the evening (Prince Charming). The Chambelan typically has the first dance with the Quinceañera, a traditional ballroom "waltz" or "vals". The Chambelan initiates the vals by requesting a dance, to classical music, with the Quinceañera. This is followed by dances with her father,  and then her godfather. Following these initial dances, the guests join the dance floor as well.

At the reception, the quinceañera girl carries a doll (representing the last doll of her childhood) intended to represent her childhood. (Some families pass the doll from one quinceañera to another as part of the family tradition).

Another tradition: after the father-daughter dance, the girl's father exchanges her flat shoes for heels signifying her transformation into a woman.